People talk about people with horn in music and movies. But today I am not going to talk about the 1950 film “Young Man with a Horn” or the novel it was based on or the songs titled Man Horns but the real horns on real people’s head! It is so strange and scary.

Ma Zhong Nan, a 93-year-old man living in a small village in China, recounts how a horn began to sprout on his head five years ago. Ma was combing his hair one day and carelessly injured his scalp. Because it was just a small wound, he did not pay much attention to it. Little did he expect that a thick, hard substance started to grow on his head. Since it did not bother him, he just ignored the growth. But the growth just kept getting bigger and harder, forming a horn of about 10cm (4 inches) long half a year later. 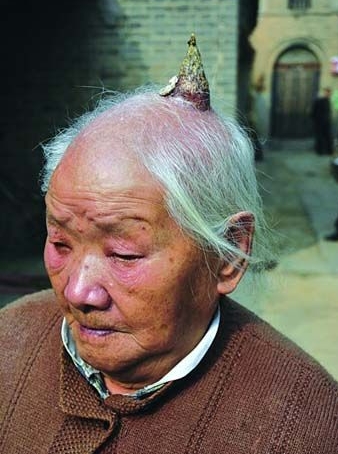 Two weeks ago, Ma suddenly felt itching of the horn and his children brought him to see a doctor at the local hospital. But the doctor has no explanation for it. His children are now trying to seek help through the media. (source, 2007-11-13)

In another news, an old man with horn is also spotted in Yemen.

Saleh Talib Saleh used to dream that he would grow horns on his head. He dismissed them as mere fancy at first, but then, at the ripe old age of 78, a horn did indeed begin to grow on the left side of his head, astonishing his fellow villagers.

Saleh, a resident of Adban district of the Shabwa governorate, claims that the horn started growing over 25 years ago. He has no explanation as to how the horn developed or why.

However, a large medical team at the Aden Specialized Hospital believe that the horn was caused by multiplying layers of hardened, dried skin on Salehs head. Eventually these layers piled up enough to become a horn. Saleh, 102, spoke to the Yemen Observer about the astonishing experience of growing horns on his head, beginning at the age of 77. The first, he said, began growing some 25 years ago, and kept growing until it reached a length of half a meter. But that horn broke off one day last year. Eight days later, another horn started growing in the same spot as the first one. This horn is currently still growing on the left side of his head. (Feb 13, 2007, Yemen Observer)

The old man told that he is grateful to God for this unique blessing.

Those two were the news article so authincity of which can’t be argued upon. I found he photo shown below while searching internet so I don’t know if it is for real or not. Anyway if it should be really inconvenient to have horn on top of your nose.

Well, don’t know how he can wear glasses if he ever had to. It sure is a strong horn!

got photos from this link

5 thoughts on “Man With a Horn”