The world’s tallest snowman  113 feet, 7 inches  was built in this western Maine town back in 1999. In the photo below the tallest snowman, “Angus, King of the Mountain”, stands tall over a crowd of people gathered to attend a ceremony in Bethel, Maine, in February, 19 1999. 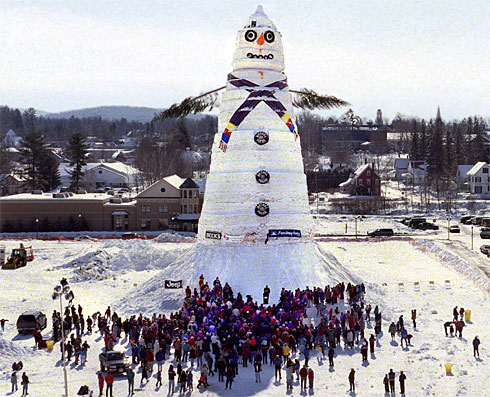 Now the Bethel Area Chamber of Commerce will attempt to build the world’s tallest snowman (snowwoman) again. It is told that the work will start on Jan. 22 and take up to 20 days to complete, said Executive Director Robin Zinchuk.

“We definitely learned a lot the first time around and that’s helping us know what we need to do. We really didn’t know what we were doing last time,” Zinchuk said. The giant snowman was named “Angus, King of the Mountain” in honor of former Gov. Angus King.

Angus was so big that his nose was 8 feet long, his hat was 20 feet in diameter and the scarf around his neck was 120 feet long. His eyes were 4-foot wreaths, and his smile was made from automobile tires.

There was also a raffle as to when Angus would melt, which with our Maine weather, was anyone’s guess. The official melt date was June 10, 1999. The raffle was divided by 22 winners. Fashion ideas being tossed around for a giant snowwoman include making a skirt out of snow, adding a pink scarf and painting tires lipstick red for her mouth.

Jim Sysko, the chief architect and engineer nine years ago, will again lead the construction team. He’ll be assisted by an engineer and a longtime snowmaker from the nearby Sunday River ski resort, which has a new snowmaking gun that could help ease the effort.

For a name, the chamber is considering holding a naming contest. The giant snowman was named by a radio station disc jockey. “I haven’t heard from Angus (King) yet, but I’m sure he will be thrilled that we’re doing it again. He’s all about doing fun things,” Zinchuk said.

Detail of the to-be-dethroned tallest snowman are:

The snowman’s hat was made by seventh graders at Telstar Middle School. His six-foot nose was made by local elementary school students and as a special touch, has the imprints of the student’s hands. 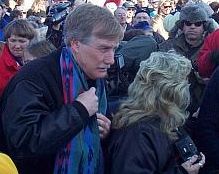 Maine’s governor, Angus King, whom “Angus, King of the Mountain” was named after, came to participate in the ceremony to honor the citizens of Bethel who achieved their goal and “made it” into the Guinness World Book of Records for the World’s Largest Snowman. He stated he felt honored to have had the snowman named after him, but wondered if “Willie Melt” might not have been a more appropriate name! (source )

The snowman is listed in Guinness Book of Records 2002, page123.

4 thoughts on “World’s Tallest Snowman to be Dwarfed”