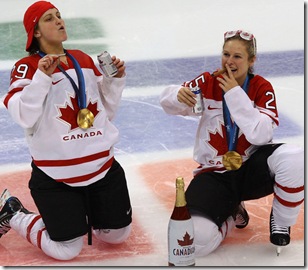 Some time after they beat the United States 2-0 on Thursday, the Canadian women’s ice hockey team came back from the locker room and staged a party on ice. The party involved bottles of champagne, beer cans and cigars.

Among others was 18-year-old superstar Marie-Philip Poulin, who was also drinking alcohol on the ice. The legal drinking age in British Columbia however is 19.

The IOC has frowned on the action and has said that it would look into the matter.

The winning team should have acted in a bit more responsive manner on the celebration of their winning — drinking and smoking on the ice was a bit more than expected. (photo – AP)