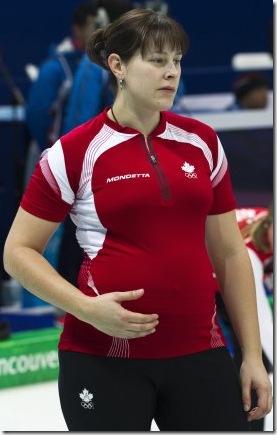 Five and half months pregnant, 30 year-old, Kristie Moore, is one of the Team Canada curling team members competing in the Winter Olympics being held in Vancouver, Canada.

She is the third pregnant athlete ever to compete in Olympic games.

Ninety years ago, Swedish figure skater Magda Julin won a gold medal at the Antwerp Games while in her first trimester and Germany’s Diana Sartor took fourth in the skeleton in 2006.

Moore is an alternative player and there is vey little chance she will actually play in the game. She is a backup player and will be called in only if she is needed. Even if she didn’t play, she will receive the medal Canada wins, if her team wins.

Good luck with the team. For the unborn child, it would certainly be an honor to be born with an Olympic medal! (Kristie in Yahoo)