In one of my posts about Bao, one of the readers, Natalie, commented telling that he is not the tallest man in the world. I searched for the man and found that he is a shy guy and would not let people measure his height. I collected some of his photos and was going to post about the man, but today I got news that he is indeed 20 cm. taller than the Chinese man. 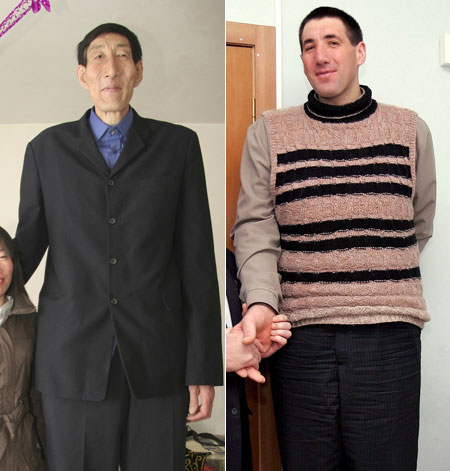 The Chinese hero Bao Xishun loses his title as a Ukrainian vet is decleared officially the tallest man in the world.

The Guiness Book of World Records decleared Leonid Stadnik, 36, who lives in a small poor village in northwestern Ukraine, is 2.57 meters (8 feet and 5.5 inches) tall the tallest man in the world.

Stadnik is more than 20 centimeters (8 inches) taller than the former title-holder/fallen hero Bao, who measures at a stumpy 2.36 meters (7 feet and 9 inches).