Katy Perry’s first album was a Christian music and was released under her real name, Katy Hudson. When she turned 18 she inked her first “Jesus” tattoo on her left wrist. She says the wrist tattoo reminds her of her roots. She got the tattoo in 2002.

Katy second tattoo was drawn from the inspiration from her first pop album. The smiling red cartoon strawberry was inked on the the inside of her left ankle in New York City in July 2009.

Four months before marrying British actor and comedian Russell Brand in October 2010, Katy Perry and her future husband got matching tattoos on their arms. The tattoo in Sanskrit read “Anuugacchati Pravaha,” meaning “Go with the flow” in Sanskrit, the ancient language of the East. Katy and Russell Brand divorced after 14 months of marriage. Russell removed the tattoo after divorce but Katy still sports the tattoo.

4. Peppermint on inside of right ankle .

Similar to her strawberry tatto, Katy Perry inked a smiling peppermint tattoo on her right ankle in November 2011 in honor of her second pop album, Teenage Dream.

The fifth Katy tattoo is inked on her right wrist – a lotus flower. Inked in January 2012, the lotus flower symbolizes “new beginnings.”

6. cherry blossom on outside of right ankle.

In tribute to her fourth studio album, Prism, Katy Perry inked cherry blossom tattoo on the outside of her right ankle. She got the tattoo in November 2013.

Katy Perry got Hello Kitty tattoo on her middle finger in October 2014. The tattoo coincides with her 30th birthday.

After Katy Perry’s Superbowl XLIX half-time performance in February 2015, Katy inked XLIX on her ring finger to preserve the moment.

In March 2015 Katy Perry got a new tattoo – a tiny triangle tattoo on her ankle, in honor of her Prismatic World Tour. 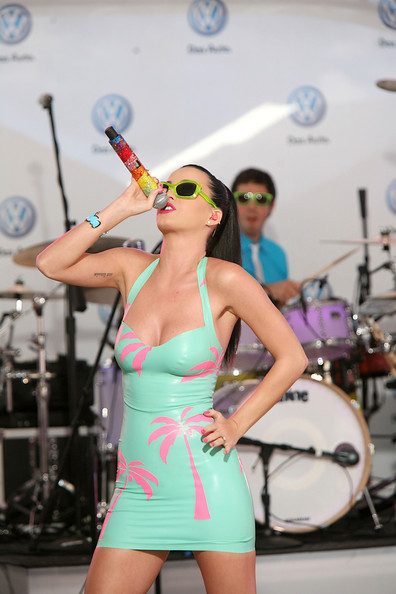