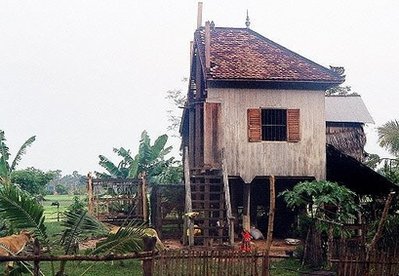 Looks like in a divorce settlement a Cambodian couple want everything to be divided into half – even the house. The guy found some of his relatives and saws to cut the wooden house in half. The ex-wife is reported to be living in the standing half of the house they once shared.

The 42-year-old Cambodian man, Moeun Sarim, found himself not getting along well with his 35-year-old wife, Vat Navy, in their 18-year wedlock.

Vat said that the divorce was prompted by her husband’s jealousy about her alleged relationship with a policeman in the village. She denied having an extramarital affair. (source)

3 thoughts on “Divorce Settlement – Cut the house in two”